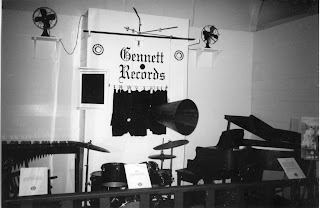 "The studio was a dreary looking Rube Goldberg place with lily-shaped [recording] horns sticking oddly from the walls. It didn't have the effect of soothing me."

--Hoagy Carmichael, composer of "Stardust"
By Randy McNutt
A few weeks ago I was driving through Richmond, Indiana, on my way north to Fort Wayne, when I looked down from a bridge and saw some old brick factories. I realized that this must be the location of the seminal Gennett Records, the roots-music label that operated in Richmond in the 1920s and early 1930s. I made a mental note to return soon to see what was down there, for Gennett is to me one of the early roots labels of any fame. When you consider what Gennett did back in the 1920s, you come to know how and why Syd Nathan did what he did with King Records twenty years later in Cincinnati.

In the mid-1990s, Rick Kennedy wrote a book about Gennett called Jellyroll, Bix, and Hoagy: Gennett Studios and the Birth of American Jazz. In 1999, we included an updated chapter on Gennett Records and its famed studio in our book Little Labels--Big Sound: Small Record Companies and the Rise of American Music. Since then, Rick has been working with with historians in Richmond to help discover more missing history about the Hoosier city's record company. He believes Gennett's old-time country music is more popular with people today than the company's groundbreaking jazz recordings, which featured such greats as Louis Armstrong and Bix Beiderbecke.
Gennett was a fascinating company to explore, especially because it was only thirty miles from my home. One thing I like about writing is a chance to uncover forgotten people and places, and this is what Rick did with Gennett. You should read his story about Ezra C.A. Wickemeyer, the studio engineer and company recording director who is about as forgotten as anybody in the record business. Nevertheless, Rick put together a fascinating story about the life and career of this early engineer, tracing Wickemeyer to Cincinnati in his later years. (Please see Rick's story on the Starr Gennett Foundation's web site, at www.starrgennett.org/stories/articles/iWickemeyer.article).
Whenever I walk the streets of Richmond, I try to imagine April 1923, when King Oliver's Creole Jazz Band, a hot group on Chicago's black nightclub circuit, arrived in town after a five-hour train ride from the Windy City. Their destination: the Starr Piano factory, operated by Henry Gennett and his three sons. In a wooden building next to the factory's rail line the Gennetts recorded some of the greats of jazz and old-time country music. The performers sang and played into a recording horn, something like a megaphone in the days of acoustic recording. (This was prior to the introduction of the electric microphone in the mid-1920s.) Commenting on that spring 1923 session, drummer Baby Dodds once said, "It was something none of us had experienced and we were all very nervous. We were all working hard and perspiration as big as a thumb dropped off us."
The studio is my main interest. That's where the recording engineer, working in what has been described as a "hot, non-ventilated place," cut twenty-eight takes for the Creole Jazz Band. Considering how hot and humid the weather can be in our area, I can't imagine how any musicians ever worked under such conditions. Yet Gennett Records turned out session after session, record after record, even when its chief A&R man, Fred Gennett, cared little about the music. He cared more about the latest fad.
In 1915, the Gennett family expanded its Starr piano business by launching a record label under the same name. The label floundered, however, due to its vertical-cut discs (like Edison's thick Diamond Discs) and many independent dealers' reluctance to carry the Starr  label name. Dealers didn't want to do business with a piano company. As a result, a few years later the family changed the label's name to Gennett, and in 1919 challenged the mighty Victor label by manufacturing lateral-cut discs, which could be played on phonographs made by Columbia, Victor, and other companies. Of course, Victor sued for patent infringement; the Gennetts won the case in 1922. This allowed the lateral-cut disc system to enter the public domain, open to anyone who wanted to use it. Amazingly, a small record company in Richmond, Indiana, had defeated one of the giants of the record business.
Before radio took hold of the public's imagination, Gennett sold a lot of records in the early 1920s. Its pressing plant in Richmond cranked out symphony music, jazz, black music, opera, orchestral music, comedies, old-time country, and any other kind of music on which the company could earn a dollar. The studio also recorded many hymns for the Ku Klux Klan, and custom-pressed the sides for the Klan's own label.


Here's how we described the Gennett studio in our Little Labels--Big Sound:
". . . the studio [was] in a gray wooden warehouse, along a row of factory buildings. It stood three feet from a secondary railroad spur for slow-moving cars hauling freight through the congested factory. To make matters worse, the main Chesapeake & Ohio railroad ran above the Starr Piano factory along the ridge of Starr Valley, also producing tremendous noise and vibration. Because of the two railroad lines, recording sessions were frequently interrupted. The studio's attempt at soundproofing involved packing sawdust between the studio's interior and exterior walls. Inside, sound resonance was minimized by hanging monk's cloth draperies from ceiling to floor. A large Mohawk rug from Harry Gennett's home was hung on one wall . . . ."
In the second half of the 1920s, Gennett started pressing hillbilly discs in large numbers. Gene Autry recorded for the company, as well as Fiddlin' Doc Roberts and others. "All the Gennetts were interested in was hillbilly music," said Joe Geier, a company recording engineer in the late 1920s. "That's where they made their money, because the Gennetts catered to Sears, and Sears catered to the hillbillies."

Gennett also recorded black blues and gospel singers at the Richmond studio as well as in its studios in New York and in its temporary studios in Chicago and Birmingham, Alabama. Bluesmen received five to fifteen dollars per recording session. No royalties. In Richmond, they were expected to stay in boarding houses in "Goose Town," a black neighborhood north of the factory that was in a red-light district that featured speakeasies. I've not heard much about the temporary studio in Birmingham, but Rick tells me it was where Baptist minister Reverend J.F. Forrest cut his sermon "Hell and What It Is," and Alabama blues harmonica man Jaybird Coleman cut one of the best titles ever, "Ah'm Sick and Tired of Tellin' You (To Wiggle That Thing)."
In 1929, another pioneering roots label, Paramount Records, paid Gennett's Richmond studio forty dollars per side to produce masters for its acts. This is how blues greats Charley Patton and Blind Lemon Jefferson came to record in the Richmond studio. By this time, Gennett was struggling to stay in business. When the full effect of the Great Depression hit in 1930, Gennett Records nearly collapsed, but somehow it continued to release a few blues and country records on its Champion label. In late 1934, the Gennett family closed Champion too, but not before they had recorded country pioneer Uncle Dave Mason and singer-guitarists Sam and Kirk McGee.
Although the Depression had nearly killed the record business and Gennett Records, the studio continued to operate into the 1940s, doing mainly sound effects records for radio. The company sold its metal masters--the original sounds of America's roots music--for scrap. When Fred Gennett, who had managed the record label, died in 1964 near Richmond, his obituary didn't even mention Gennett Records. Even his grandsons didn't know he had recorded some of jazz's earliest sides, and some of America's finest early country ones. Jazz must have been that unimportant to him.
But the people of Richmond haven't forgotten his accomplishments, nor those of Gennett Records. They want to make sure that the world remembers their city and the music it gave to the generations that have followed.
On September 10, 2011, Richmond will host a Gennett Walk of Fame program called "Mo' Blues," a combination of food, discussion, and live music. Of special interest: from 1-4 p.m., two Gennett researchers will "tour" the Gennett Studio. See the group's Web site for additional details.
Recommended reading:
Jellyroll, Bix, and Hoagy: Gennett Studios and the Birth of Jazz (Rick Kennedy, Indiana University Press).
Little Labels--Big Sound: Small Record Companies and the Rise of American Music (Rick Kennedy and Randy McNutt, Indiana University Press). 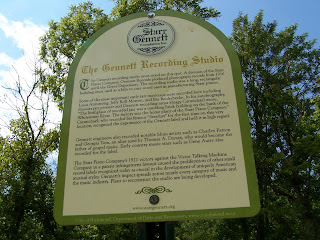 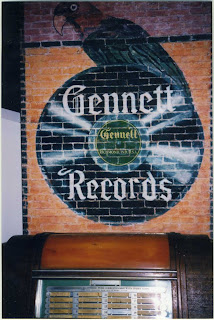 Recently taken photos of the company logo and
a marker for the studio, near the site where the studio stood. 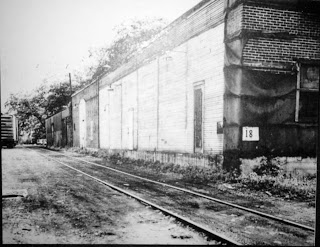 Gennett complex as it appeared in the company's heyday.
Posted by RANDY McNUTT at 7:42 PM 4 comments: