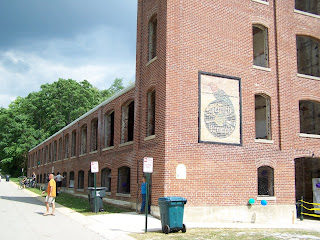 In Richmond, Indiana, on Saturday (September 10, 2011), local Gennett Records and Starr Piano enthusiasts kicked off their Mo' Blues concert and tours in Whitewater Gorge, the area that housed the independent label's factory complex in the 1920s and 1930s.

Under warm and sunny skies through mid-afternoon, the Starr-Gennett Foundation Inc. organizers welcomed people from across the region and several states.

Martin Fisher came from Middle Tennessee State University in Murfreesboro, where he is is manager of Recorded Media Collections. "I will go wherever people are interested in hearing acoustic recordings, if the drive is within a reasonable distance," he told me. Fisher brought several acoustic talking machines, including a large one that he used to play back cylinders that he recorded with guests of the Mo' Blues concert and tours. He said he buys blank cylinders from a man in England, who manufactures them at his home. Fisher said another man, an American, also produces blanks, which also can be used to record on home machines.

The program was held at the Gennett-Starr factory area in the Whitewater Gorge Park in Richmond. Parts of the original buildings still stand. Concerts were held inside one of them. On a sidewalk leading along where the factory once stood is an attractive Walk of Fame, featuring a number of prominent artists who recorded for Gennett Records or its spinoff labels.

Fisher operated in a booth near where the Gennett Recording Studio once stood. "There's so much history left here," he said of the park.

Gennett Records is known for its disc recordings. At the historic site, a concrete floor is all that stands of the firm's record-pressing unit.

For Gennett's many recordings made before and during the Depression, Richmond calls itself "the cradle of recorded jazz." The Starr-Gennett Redevelopment Plan began earlier this year, using a federal grant. One of the Foundation's goals is to build an interpretative center, including a replica of the Gennett Records sound studio.

To donate or seek additional information, contact the Starr-Gennett Foundation at 33 South 7th Street, Richmond, IN 47374-5462, or see the group's website at www.starrgennett.org. 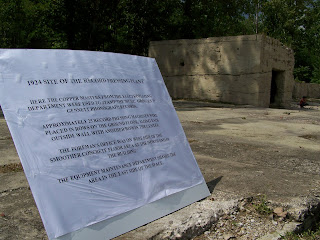 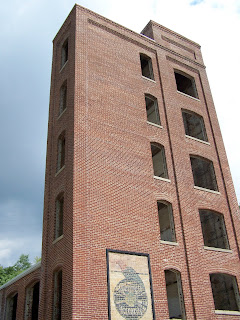