"I Really Want to See You Tonight"
"Nights Are Forever Without You"
by England Dan and John Ford Coley,
as well as hits by Dr. Hook and other acts.


Quirks: Located in the basement.


In the late 1970s, I heard a record on the radio that impressed me for it's clarity and style: "I  Really Want to See You Tonight" by England Dan and John Ford Coley. To me it was a perfect Top 40 single. The recording, produced by the talented Kyle Lehning, came out of recording engineer Lee Hazen's Studio by the Pond in Hendersonville, the home town of Johnny Cash. I had been to the pleasant suburban Nashville community only once, and I decided right then that I wanted to go back.

So I called information, and then dialed the studio. Lee Hazen himself answered the telephone. To my surprise he invited me over to his house, and to my further surprise it was also his studio. His modest single-story home was located on beautiful Lake Hickory, near Crystal Gayle's place. I talked to Lee at length about recording and the history of recorded sound, and learned that he was also a fan of antique music machines, old phonographs, and the pioneers of recorded sound. Later, I booked a mixing session. My friend Wayne Perry and I drove down with a 16-track tape we had cut in Cincinnati, and on a day in early autumn we were mixing at one of Greater Nashville's hippest new studios. The atmosphere was relaxing compared with New York's studios or even Nashville's higher-priced ones. There was no pressure, little formality. I could leave the booth and call upstairs to Lee. The studio was hot then. The hits were flying out of it. England Dan Seals and Coley had cut some more hits there, including "Nights Are Forever Without You," and other artists came to make records, including the wonderful songwriter Parker McGee, for Big Tree Records of New York.

Lee didn't mix our song. We hired a a freelance recording engineer. But Lee was there to listen in, and I interviewed him when we finished our work. He took us upstairs and showed us his collection. He fascinated me with his knowledge of recording and sound.

Lee began experimenting with sound in native of Florida, where he recorded "Little Black Egg" by the Nightcrawlers in 1966. The rock band's Kapp Records single charted in early 1967 and became a minor hit nationally. Soon Lee went to Cincinnati to become a recording engineer at King Records. He said he left because owner Syd Nathan intimidated him with his gruff demeanor. But while Lee was there, he engineered the Fraternity Records hit "Then You Can Tell Me Goodbye" by the Casinos" in 1967. Even then, Lee knew sound and how to effectively record it. In Nashville later, he would start a mobile recording studio, using a large van, and record sessions at various locations. 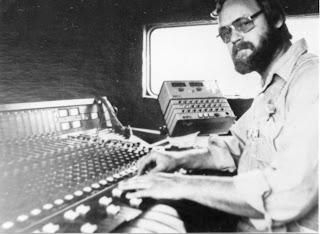 Of Tennessee's many home-grown recording studios of the 1970s, including Wayne Moss's Cinderella Sound in Madison and Chip Young's Youngun Sound in Murfreesboro, Lee Hazen's Studio by the Pond always stands out in my mind. He opened the studio in his basement in the early '70s and slowly collected gear. Soon word got out that he had a studio, and producers started coming by to record tracks. By the time I arrived in 1978, Lee had a nice little operation going. He didn't have to engineer every session, and he didn't have to leave home to go to work. He simply walked down to the basement, which was covered partly in carpet, sound-proofed tiles, baffles, and other materials. He even had a control room. I've been in many basement studios in my time, from the early 1970s to the present, but this one was the coolest I have ever seen or heard. I mixed the track that Wayne Perry, later a hit Nashville songwriter, and I had brought to the Studio by the Pond, and it became one of the best-sounding mixes I've done anywhere, including the legendary Allegro Sound in New York and Woodland Sound in Nashville.

Lee's fascination with old sound machines led him to record the automatic musical instruments in the collection of Kurt Elbers. The session featured a Seeburg "K" from 1926, a National Calliope with 53 keys, and an Artizan band wagon organ from 1930. Lee recorded the collection on July 4, 1976, and by the time I met him a year or two later, he was still talking about the experience. He gave me an alburm, which he released on his own Full Basement Records. I loved the label's name, for it was certainly accurate. Full Basement for sure!

Lee credited his interest in sound and engineering to his time spent working in the better studios, including King, Criteria in Miami, and Woodland. Although he stayed in Cincinnati only about a year, he learned a lot from having to do about everything that owner Nathan required. In Nashville, Lee found a wide-open field for recording, although also much competition. That's when he founded Lee Hazen Recording Service to record live events.

When I mixed in his studio, Lee was using an MCI 24- and 16-track recorders. (A list of other equipment is listed below in an old card that I obtained on one of my visits then.)

The end of Studio by the Pond came in the late 1980s when Lee said a neighbor complained about not receiving good television reception. Lee claimed the studio had nothing to do with this, but he had to close the operation anyway. He left the basement as it was for a long time.

When I look back on those days, I consider Lee Hazen one of the top independent recording engineers in Nashville, and Studio by the Pond a refreshing and fascinating place to work. 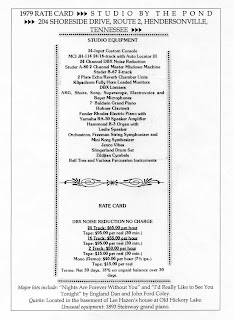 I used this 1979 rate card as a full-page piece
of art in my book Still Too Hot to Handle.

Hi. Having been in Lee Hazen's Studio by the pond in the late seventies when a group I was with was recording vocals there, I found your article a lot of fun to read and it brought back fun memories of the old days of recording.
I remember being a little surprised at the close quarters and low ceiling but still maintain it's about ears more than equipment and space.. and that the audience rarely ever knows the difference.
I seem to recall other hits from there.. Maybe Dan Fogelberg or Jimmy Buffet? Can you verify that or fill in some of my memory gaps?
Thanks for the cool article.
Tim Norris

Lee had a bad stroke a few years back and just recently finally died march 11 .
A number of us in and outside Nashville will be remembering him this sat, Mar25 2017