The office building that once housed E. T. Herzog Recording, one of Cincinnati's legendary studios, has gone from obscurity to regular use, thanks to local music enthusiasts who were determined to keep its memory alive. Now it is marked prominently by a historical marker and the room is used for live-musical performances and meetings of music fans.

The story of Herzog Recording, 1945 to 1955, mirrors the story of sound recording in the mid-20th century, jumping from recorded acetates to one-track magnetic tape recordings.

The studio was founded in 1945 by Earl T. "Bucky" Herzog, an engineer at the famous WLW Radio, and his brother, Charles. After the war, Herzog collected some hard-to-find recording equipment and opened a studio in his home. He quit his full-time job and started recording. Soon he opened a studio at 811 Race Street, on the second floor of a brick building in downtown Cincinnati. In those days, studios weren't plentiful, and neither was recording equipment. But Herzog knew sound and how to record it, and soon his studio's reputation spread beyond the city limits.

I was lucky to meet Bucky Herzog in the late 1980s. When he told me Hank Williams recorded in his Cincinnati studio, I thought he was joking. Then I realized he was not the joking kind. Some of the well-known singers and musicians who recorded there read like a Who's Who of music in Cincinnati and country music history. They include studio guitarist Zeke Turner, and Rex Allen, Patti Page, Red Foley, Homer and Jethro, and Moon Mullican.

In those early days, Nashville had not yet developed as Music City U.S.A. It had the "Grand Ole Opry" radio show, but not much else. Cincinnati, on the other hand, had the fairly new King Records and its country hits from Grandpa Jones. Later, Ernie Lee recorded music for his WLW radio show at the studio. Lester Flatt and Earl Scruggs cut the original version of "Foggy Mountain Breakdown" at Herzog, and the Delmore Brothers recorded "Freight Train Boogie" there.

On December 22, 1948, music publisher Fred Rose came up from Nashville with Hank Williams. Hank cut "Lovesick Blues" with the Pleasant Valley Boys. It helped them become well-known studio musicians. On August 30, 1949, Williams returned to cut eight sides at the studio, including his iconic "I'm So Lonesome I Could Cry" and "My Bucket's Got A Hole In It."

Herzog's engineering experience at WLW helped him learn the art of recording sound. He started there in 1936 and continued to work part-time at the station until 1966. "I did many broadcasts with Chet Atkins in the late '30s," Herzog told me in 1989. "Chet worked there too. In those days, Nashville was just Nashville. Cincinnati was much bigger as a country music center. WLW had many country acts on its roster. Then the station had The Midwestern Hayride. All these performers would work out of WLW and do shows every day and night in the late '30s. We had the biggest staff of any non-network station. Down in Kentucky, the Renfro Valley (Jamboree) preceded the Grand Ole Opry. It was really the forerunner of the Opry every Saturday night."

At his studio, Herzog recorded Lee's country radio show for WLW, as well as other programs and recordings. "We did so many things, even R&B for King Records," Herzog recalled in an interview with me in 1989. "We were one of only a few studios in Cincinnati back then, in the late 1940s. Syd Nathan used to come to my studio to record his people for King Records. He'd get all worked up and make the musicians nervous. I told him he had to stop coming by. So he opened his own studio at his factory in Cincinnati. I guess he got tired of going out of town to record."

Eventually, Herzog sold his studio and opened Audiocraft Recording on the west side of Cincinnati. But he never forgot the days of old country music. The images of its heyday remained with him.

Nowadays, the original equipment is gone but the long room is used for meetings of the Cincinnati USA Music Heritage Foundation, which was formed to promote local music history and artists. Elliot Ruther, the group's president, and Brian Powers, a reference librarian at the Public Library of Cincinnati and Hamilton County, have spent many hours researching the studio's past. "The studio is our musical history," Powers said.

Members have worked hard to open the second floor--where the studio operated--for use by the historical group. "To make a long story short and excellent, we unveiled a historical marker for the studio and Hank Williams on November 22, 2009," Ruther explained. "Prior to that, we commemorated the 60th anniversary of the recording of 'Lovesick Blues' with a concert in the studio room."

Since then, the group has found old photos of the studio and Herzog, and has blown them up to larger sizes and mounted them on the walls. They have also sponsored concerts honoring Hank Williams, the father of contemporary country music. 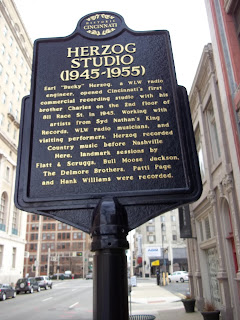 This two-sided historical marker
tells the story of Herzog Recording.
The sign was erected in 2009.
(Photos by Randy McNutt) 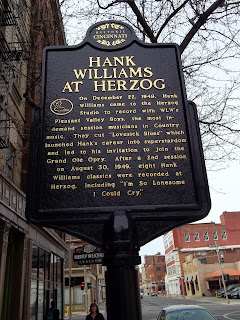 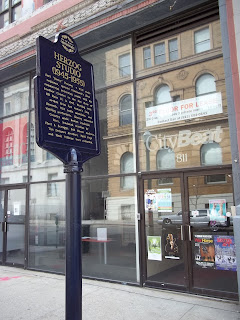