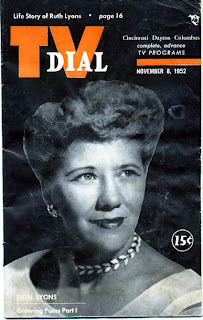 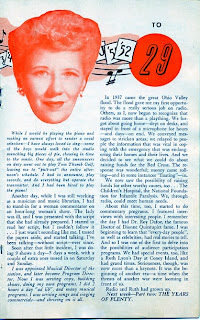 Ruth Lyons wrote hits, misses, and Christmas songs. She wasn't shy about her work. She'd tell the biggest stars that they should listen to what she had written. Many of them did, too. Johnny Mathis, a guest on her popular Cincinnati television show whenever he was in town, recorded her melancholy "Wasn't the Summer Short?"﻿ It charted on Columbia Records.
Most people in her listening and viewing area associated her songs with happy times, but every so often Ruth would slip them a curve ball in the form of a sad pop melody. I like these most of all.

I knew Ruth in my childhood and teen years. My mother and aunt used to take me to her show, and Ruth first asked me to sit on stage with her when I was only three. I told jokes; she laughed. So did sidekick Willlie Thall, another TV musician when he wasn't working with Ruth. In time, she had a member of her staff take me on lengthy guided tour of the television station, WLWT. By watching the big tape recorders, I became interested in sound recording.
For years I was aware of Ruth's songwriting but I never thought much about it, not even when I got into record production years later and started writing a few songs myself. Only recently did I acquire an appreciation of Ruth as a songwriter. I suppose maturity and the years prompted me. Suddenly, it hit me: Ruth Lyons could write! She also was an independent record producer, mainly producing her material at the King Recording Studio in Cincinnati. In those days, the 1950s and 1960s, few women were involved in record production.
She wrote one Christmas song each year at the holiday time to promote her Christmas Fund. Donations were used to buy toys for kids who were in the hospital during the holidays. The Fund was successful, especially during the 1950s and 1960s when Ruth could promote it on her show. In the 1950s, she launched her own label, Candee Records, named for her daughter. Candee released many of Ruth's recordings, although she also recorded for Columbia Records. Like many songwriters, she wasn't much of a singer. She usually left the vocals to her show's staff vocalists, including Marian Spelman, Bob Braun, and Ruby Wright. But Ruth could play the piano, and when she did sing, the message came from the heart. This is what I enjoy hearing most when a writer sits down to sing. 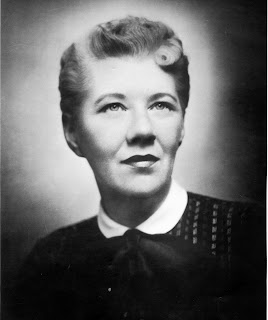 Though she wrote songs about love and joy, her specialty was the time-honored Christmas song. Ideas occurred to her in any season, at any time, and at any location--even on vacation in the Caribbean. They included my favorite, "Let's Light the Christmas Tree." On December 2, 1957, singer Ruby Wright took the song to number 41 on Billboard's Hot 100. It was released on Harry Carlson's Fraternity Records. The record was such a sales success in Ohio, Kentucky, and Indiana that it popped up that high on the chart. Of course, the record had help from sporadic airplay throughout the nation. Ruby, a regular vocalist on the 50-50 Club, would later record for King Records in Cincinnati. But her most successful record by far was Ruth's "Christmas Tree." Harry once told me that he was fortunate to sign Ruby because she was a respected pop singer with a recognizable face. She was married to big-band leader Barney Rapp.
Ruth wrote her share of upbeat Christmas songs, such as the happy "Hey Nonny Nonny" and "Have a Merry Merry Merry Christmas." But she must have been in a melancholy mood when she wrote "Let's Light the Christmas Tree." The lyrics say Merry Christmas, but the lyrics say it with a sadness you don't often hear in holiday pop songs. On her albums, extended-play records, and singles, Ruth's heart touched the listeners. She wrote her share of happy, funny songs, including "Sing a Song of Christmas" and "Christmas is Gettin' Might Close." But for this fan, her best songs were "Let's Light the Christmas Tree" and "Wasn't the Summer Short?" Two opposites on the seasonal spectrum, but two that capture the feel of their times. -- Randy McNutt
Posted by RANDY McNUTT at 4:31 PM

Love this story about this female record producer and her Christmas records! You have the most fascinating stories! Love your blog!

Very interesting article about this female songwriter. I enjoyed it. Love your blog.