This story first appeared in homeofthehits2.blogspot.com on April 24, 2016. We are republishing it in honor of Lonnie Mack, whose life and career will be celebrated in a program at the Cincinnati and Hamilton County Public Library at 1 p.m. September 15, 2018 in downtown Cincinnati. Speakers will include Cincinnati musician Carl Edmondson, who produced several of Mack's early records, including "Memphis" and "Wham!"

Farewell to the Memphis Man
and the Cincinnati Sound


When Lonnie Mack died in a Nashville hospital on April 21, 2016, his passing was felt in Cincinnati. I'm sure his death at age 74 will be overshadowed by the death of Prince, the celebrated performer who died on the same day. For those of us who appreciate blues-rock, however, Lonnie will also be hailed as special. He influenced Stevie Ray Vaughan and untold numbers of guitarists. Just knowing that Lonnie Mack was alive kept me connected to those gritty roadhouse sounds that I long to hear.

With his passing, something else finally died too--the old Cincinnati Sound. That's what people used to call the Queen City's blue-eyed soul and blues-rock sound of 1960 to 1975. In time, disco madness ran it out of town. Cincinnati was probably the last place on earth that harbored it, like some stubborn virus hiding in the veins of America. And Lonnie Mack was its undisputed king.

I suppose the Cincinnati Sound was all but gone anyway, but so long as Lonnie Mack was still alive I could trick my mind into believing that the old Sound still existed. After all, he was the flame that kept it all going. Every time I'd drive through some little town in southwest Ohio and see a shuttered, funky old roadhouse like the Blacksmith Shop in McGonigle, I'd think of Lonnie and imagine that  his tight band was playing inside. I'd momentarily believe it was still the 1960s. Sounds of "Memphis," "Crying Over You," and "Honky Tonk '65" would fill my head. But now that he is gone, I don't know what I will think the next time I pass one of those run-down places. I'm sure I'll feel a little empty.

Lonnie was a fixture in the clubs and roadhouses around Cincinnati in the 1960s. His music was part blues, some good-time rock 'n' roll, and an occasional country lick thrown in for good measure. The best way to describe it is Lonnie Mack music. He could put his stamp of personality on any song.

Born Lonnie McIntosh, he was a Hoosier from Aurora, Indiana. He dropped out of school and started playing the Cincinnati area clubs when he was only fourteen. I believe his career can be divided into two parts: the double-punch "Memphis" and "Wham!" singles period, which ran from 1963 through the 1970s, and the Strike Like Lightning period, which came in the mid-1980s and ran into the 1990s. After that, things slowed down for Lonnie and he stayed on his farm in Smithville, Tennessee. In the '80s, Bruce Iglauer, who grew up in suburban Cincinnati and knew of Lonnie's guitar legends, signed Lonnie to the Alligator blues label in Chicago and gave the Whammy man a second life that sent him all the way to Australia to play. My favorite album they did for Alligator was Strike Like Lightning, for which Lonnie drew upon his past for inspiration. He also brought along drummer Gene Lawson, an early band mate, to pound the beat. Gene's intelligent approach was a steadying influence.

While involved in the Cincinnati music industry in the 1970s, I got to know some of Lonnie's players. They influenced me greatly. They became good friends and trusted musicians. Years earlier, I saw their names on album covers: Gene Lawson, drums. Denzil "Dumpy" Rice, piano and acoustic guitar. Wayne Bullock, Hammond B-3 organ and bass. All wonderful guys and terrific players. Dumpy is gone now too, but his memory lives on every time somebody plays his song "There's A Honky Tonk Angel (Who'll Take Me Back In)." Even Elvis cut it.

Last June 7, Wayne Bullock hosted another of his Cincinnati musician reunion shows at the Harrison, Ohio, VFW Post. One hundred of them came varied places and new occupations. To my surprise, Lonnie walked in, coming all the way from his home in Tennessee. I enjoyed talking to him. He was never a talkative or humorous man, at least not around me, and I realized this when I was set to interview him 20-some years ago. So I decided I had better pair him with Dumpy one night as we sat in a reincarnation of that little roadhouse in McGonigle. Their conversation flowed like soul river. Funny, poignant, fascinating stories. Stories of the road, stories of one-nighter performances and long drives. Eventually, their conversation appeared in "Lonnie on the Move," a chapter in my book Guitar Towns: A Journey to the Crossroads of Rock 'n' Roll. (Indiana University Press, 2002). On that June 7 at the VFW Post, however, I sensed that Lonnie had come to see his fellow players possibly for the last time.

Lonnie's death inspired me to write this appreciation of him. He was not a man who talked about his accomplishments, so I will. I try not to write these kinds of stories about musicians because that is all I would be doing, writing obituaries. But Lonnie, well, I just couldn't resist. He was the heart of the Cincinnati Sound. There were so many blues-rock and white soul bands around Cincinnati then that I lost count. Billy Joe Royal, another wonderfully soulful singer, sang in town then. Even the Casinos, known more for their pop sound, recorded their own version of "Soul Serenade," and it was a good one. An old story goes that at least once a night somebody in the audience anywhere would scream, "Play 'Soul Serenade'!" It became a hybrid of Cincinnati and Memphis.

It's hard to say goodbye to performers of Lonnie's stature. He had a great career. It's too bad it couldn't have continued at the pace of the "Memphis" days forever, but then times and tastes change. I still enjoy playing his only vinyl album released on Fraternity Records in 1963, The Wham of that Memphis Man! Produced by another top Cincinnati guitar man, Carl Edmondson, the album has been a collector's item for years. Around 1970, Lonnie's manager, Harry Carlson of Fraternity, dealt the guitar man's contract to Elektra Records in Los Angeles, and from there Lonnie played on sessions with the Doors and also at their live performances. He recorded some good solo albums (Whatever's Right and Glad I'm in the Band) for Elektra, and convinced the A&R staff there to allow him to record a lot of the tracks where he felt the most inspiration--Cincinnati. He recorded at Rusty York's Jewel Recording in Mt. Healthy, a little studio in the older suburbs. On audio tape. No gimmicks. On the backs of the albums you will find the names of some of Cincinnati's best players of that time, in the late 1960s and early 1970s. They include Lawson, who kept the beat as well as he did on "Memphis" in 1963. "We used so many musicians," Rusty once told me, "that we had to stick the horn players way out in the hallway."

Looking back on those days, they seem like a dream--vaguely remembered, yet real somehow. The record industry has changed, and so have people's tastes. But still, to me there is nothing more exciting than to pop The Wham of that Memphis Man down on a turntable and listen to Lonnie play guitar on "Wham!" and wail like the Hoosier blues man on "Where There's a Will There's a Way."

Farewell, Lonnie. You'll be picking with Dumpy and Rusty tonight. 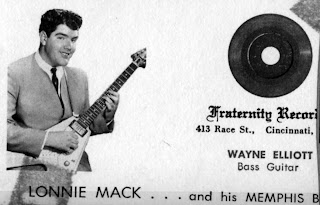 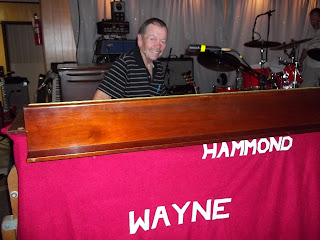 Wayne Bullock on the B-3 at
musician's reunion party. Wayne
played bass on "Memphis."
(Photo by Randy McNutt) 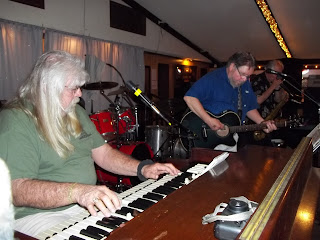 Carl Edmondson picks the guitar,
minus the Driving Winds, June 20, 2016.
(Photo by Randy McNutt)
Posted by RANDY McNUTT at 3:29 PM

I remember Lonnie and his flying V. and cowboy hat. Was that the late 70's or later era? When he had the beard and fancy outfits? What an energetic guitarist and singer!!!