Record Pressing Keeps On Keeping On

From Randy McNutt's Spinning the Groove: An A to Z
Guide to the Lingo and Legacy of the Old Record Business
($25, Amazon.com)

The golden days of the record pressing plants are over, though lately they have returned for an encore as demand for vinyl discs attempts to keep up with need. An indie label owner in New York told me in 2016 that he had to send his orders to a plant in Cleveland, and even then he had to wait six months to receive his records. The good news is that some new plants have opened since then, and pressing companies that once made records are returning to the market. Their problem is, they sold or scrapped all their presses in the 1990s, when compact discs came into favor. At that time few people believed that vinyl would ever be in demand again. The few plants that remained stayed in business by making specialty pressings. My prediction is that the number of plants will continue to increase and then taper off as the ceiling for singles and LPs is reached. After all, plastic discs are more for collectors than the everyday music fan, who wants his music fast and doesn’t care to “own” it. As for me, I want to own it, either on vinyl, CD, or even in downloads.

As late as the 1980s, pressing plants were all over America and the world. Their main business was manufacturing singles and LPs for record labels. Some plants were owned by large labels such as RCA and Columbia, which also did custom work for about anyone who would pay. Independent plants such as United in Nashville did excellent work, too. Then there were the small plants owned by individuals, recording studios, and a few little indie labels. (Their pressings were often, well, spotty.) As a way to generate additional income, these operations often offered pressings to their customers and musicians who lived in the area and needed a record made quickly. I did one once at Artists Recording Studio in Lockland, Ohio. When I went over to pick up my boxes of EPs, the owner took me on a tour, which didn’t last long. He had only about six presses. Another time I stopped at a suburban Cincinnati pressing plant and a label called Rite Records, which had about a dozen presses and did a good little business pressing for gospel and country acts. The old-man owner had a hair-trigger temper. When I inquired about the cost, and told him that I could get the job done less expensively at Artists, he started yelling and throwing up his hands. “Get out of here! Get out!” he shouted. I did—fast.

Then there was my memorable first record, pressed by King Records’ Royal Plastics division in Cincinnati. This was, as I recall, in 1970. (I was no more than a kid producer who didn’t know a biscuit from a band.) The label owner who released my record usually went to a Nashville plant or to RCA, but this time he wanted to rush-release my production. King offered to turn the custom order around in only a few days. When I first heard my record, I was disappointed. It sounded, well, I can’t describe it. Kind of flat. The next record I cut for another indie label was pressed at RCA. What a contrast. You could always tell a RCA pressing from others because its 45s were a little thinner. They played well, too. Of course a lot of the quality depended—and still does—on the mastering.

In Cincinnati, Royal Plastics was led by Howard Kessel, a grumpy guy and an original King investor. He once admitted to me that Royal’s records were not all that good compared to the products made in the more sophisticated, corporate-owned plants. This was due, he said, to Royal’s older presses. In the 1950s Royal had switched over from making 78-rpm discs to 45s and LPs. Some of the presses had been updated over the years, and others not. Fortunately, Royal’s press operators—consisting mainly of women but a few men too—knew how to make records. The middle-age women worked there for years. According to one outrageous legend, the old factory got so hot in summer that employees’ sweat ran onto the floors. One guy, who later became a top mastering engineer in Los Angeles, once told me that he saw a female press operator take off her blouse once and never miss a beat. I still don’t know if he was kidding.

Heat notwithstanding, they were an experienced lot, those King press people, good enough to crank out millions of James Brown discs and also the ones recorded by Hank Ballard and the Midnighters and other R&B and country acts. By the late ’60s demand had become so great for Mr. Dynamite’s records that King farmed out some orders to RCA. I suppose the irascible Sydney Nathan, King’s president, hated to do it, but then he wanted to sell every record he could. By then Brown’s records were keeping the doors open—at both King and Royal Plastics.

Today, United in Nashville is still punching out the same good vinyl discs that it did for me back in the 1970s and ’80s. It is a survivor, and it is expanding.

The vinyl freaks out there want their discs and they want them now. 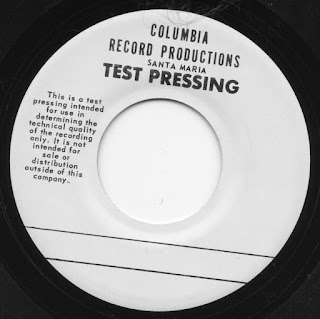 Posted by RANDY McNUTT at 3:02 PM No comments: