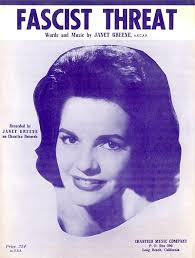 Most people think of folk music as intimate performances and campfires. But there is more, much more. Used interchangeably with hillbilly into the 1940s, the name folk became a marketing term. In the later years of its dual use, it was applicable to guitar-strumming vocalists like Clyde Moody, who recorded for King Records and other labels. One can see how the term eventually became used by the folk singers of the ’60s, the real heyday of solo and group folk singers. Along with it came another side of folk, the right side, which I call conservative folk music. Its roots came from the same tree as conventional folk.

But first, a little background: The initial wave of modern folk music arrived in the late 1940s with Pete Seeger and in the 1950s with more “hip” groups such as the Kingston Trio, which turned out sing-a-long hit records. Many folk acts (and non-folk) recorded the old Negro spiritual “Michael Row the Boat Ashore,” a song that originated in post-Civil War days. After losing popularity with the mass commercial audience during the early Cold War years, folk music resurged during the turbulent 1960s, when Joan Baez, Buffy Saint-Marie, Bob Dylan, Ian and Sylvia, and many other acts sang about civil rights, social justice, the war in Vietnam, and other liberal causes. Labels popped up to accommodate the burgeoning number of new folk artists. The hippie movement embraced folk as well as rock-band psychedelic music. The heyday of coffeehouse folk music thrived, especially in urban settings.

That’s when the conservative wing arrived. Conservative folk singers? Come on! You might ask why and how. Wasn’t liberal folk pre-woven into the fabric of the music? Yes, it was. But to young people who lived in the 1960s, folk music also meant one singer, one acoustic guitar, and the intimacy of the performance.Just because a singer was politically conservative didn’t mean he or she hated the style of folk. So a few took up their guitars, wrote songs, and changed folk’s liberal themes to conservative ones. Naturally, these singers were rare. This is because many conservative youth of the day had an image of folk music, and it was Joan Baez. They didn’t want to think of the “F word.” Folk, that is. So if they even heard of conservative folk singers, they regarded them as quirky, but nonetheless worthy of being heard.


Leaders in the conservative folk movement, if we can even call it a movement, were Janet Greene, an Ohio-born entertainer who began her career at eight years old and later became a children’s TV host in Cincinnati and Columbus; Vera Vanderlaan, who worked on her family’s dairy farm in Vermont; Bunny Kop, a nurse from Massachusetts; and Tony Dolan, a student at Yale University, a liberal bastion. Greene recorded for Chantico Records of California. The label was an offshoot of Dr. Fred Schwarz’s Christian Anti-Communist Crusade. Greene toured with him and other conservative speakers. She sang and recorded original material, including “Termites” and “Comrade’s Lament.”

Greene, the most well-known conservative folk singer, was a big part of Schwarz's programs. As he said, "The communists are unhappy that the forces of freedom and morality have at last awakened to the power of music and have commenced to use it effectively. The communists have been using music for many years. The ideas of freedom can be presented most effectively in song . . ." At that time, the mid to late 1960s, America was rocked by race riots, anti-war demonstrations, assassinations, and a general upheaval in society. The nation was still reeling from the communist scare of the 1950s, and groups such as the Christian Anti-Communist Crusade were drawing large crowds of people who wanted to learn what the Cold War was all about and how they could help America win it on the home front.

It isn't generally known how effective conservative folk singers were to the cause. There were so few, that is doubtful that people remember them. They operated concurrently with liberal folk singers, so there assumption is that the two presented two sides of the story. But the tiny contingent of conservatives were drowned out by the wave of liberal folk singers, who received attention from larger record companies and television. After a performance one night in Cincinnati, Greene challenged Baez to a duel—with guitars, not guns. Apparently Baez was too busy performing to care. Vanderlaan and Kop both recorded for another California label called Round Table Music. Tony Dolan cut a small-label album for which conservative-libertarian William F. Buckley, Jr., host of The Firing Line TV show, wrote the liner notes. In the late '60s, Dolan performed at coffeehouses in Connecticut, where liberals found him amusing. How things have changed. Not one to surrender, he went on to become a speech writer for Ronald Reagan. Greene left Chantico in the 1970s and sang a combination of folk, show tunes, and pop music in California restaurants and small clubs around Long Beach. What happened to Vanderlaan and Kop? And Greene and Dolan? They were lost in the cracks of music history. Their records are rare and collectible among hip liberals and even some conservative young people

Perhaps Dolan had the tougher time of it. After all, he was at Yale. Egghead professors and students of the far left and the anti-war crowd had to have rained down scorn on the young singer. He seemed unnerved. He ended up in another nerve-wracking place, the nation's capital.

Today, the brief appearance of conservative folk singers is but a blip on the radar screen of American music. 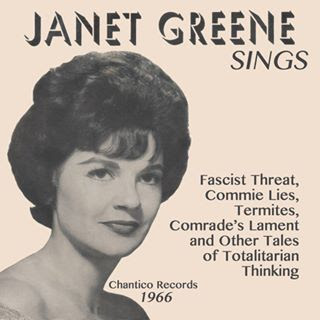 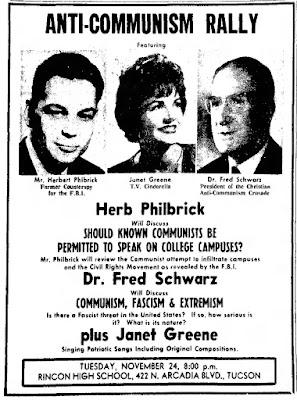 A 1960s advertisement for
the Crusade's shows in Tucson. 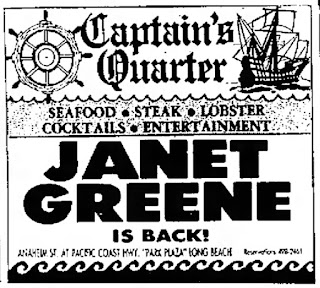 In the 1970s, Janet Greene left the movement
to perform in restaurants and small clubs. 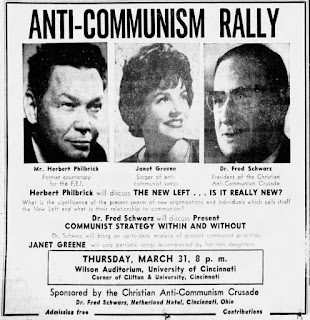 The Crusade takes Green back to
Cincinnati, mid-1960s. 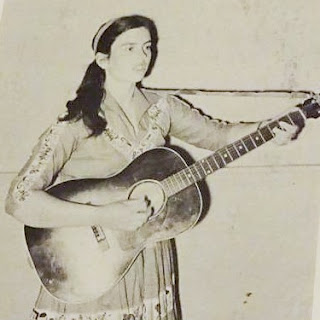 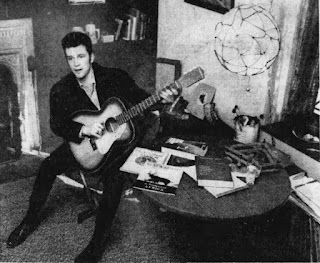 Tony Dolan might not have appeared on Bill
Buckley's TV show Firing Line, but the young
singer surely was on the firing line at Yale.
﻿


Parts of this story are excerpted from Randy McNutt's book "Spinning the Groove," published by HHP Books and sold through Amazon.com.

Posted by RANDY McNUTT at 8:25 PM No comments: