Featuring everyone from Little Richard to the Dapps 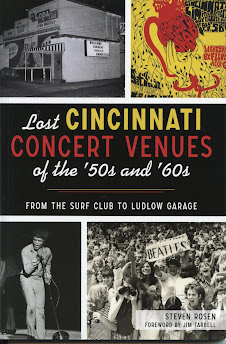 I don't review music books on the blog often, and when I do I prefer to write about those that provide a human connection. One of them just came out from the History Press. It's called Lost Cincinnati Concert Venues of the '50s and '60s by Steven Rosen. I must say that Steve is a good friend and former colleague at The Cincinnati Enquirer. He was the founder of One Shot magazine, which published some of my stories in the 1980s. It morphed into Steve's One Hit Wonder Day. His experience in writing feature stories--he has written them for The New York Times, the Denver Post, and many other publications--helps him combine his role as storyteller, writer, music critic, and historian.

Though his new book is about music clubs in Cincinnati and northern Kentucky, it is much more than a local book. The city was the home of the King and Fraternity record companies, which recorded country, soul, rock, and other types of music. At times, many of their performers played in local clubs. Some recorded hits for other labels. The performers ranged from Columbia Records artist Billy Joe Royal, the country-rock singer of "Down in the Boondocks" and "I Knew You When," to Lonnie Mack, the well-known blues-rock guitarist who hit with "Memphis" and "Wham!" for Fraternity. Billy often sang at the Castle Farm and Guys 'n' Dolls clubs. Both men went on to have long careers. Another local sensation was an R&B band called the Dapps. Though they had a short career, the white group backed Hank Ballard and cut their own records at King. They often performed at the Inner Circle, a Cincinnati magnet for talented rock and soul musicians.

But the concept of Steve's book is universal. Local clubs were and still are in every town and city all over the world. Their contribution to recording is often overlooked. When Mack's band performed in area clubs in the 1960s, they began playing an instrumental version of Chuck Berry's "Memphis." For months they tinkered with it, incorporating licks that the crowds enjoyed. They did it for fun. Finally, while backing another group on a session at the King Records Studio, the band knocked out their own "Memphis." It would take some determined promotion by Fraternity owner Harry Carlson, but "Memphis" hit big nationally. If not for the Blacksmith Shop and other Cincinnati-area clubs, Mack's band would not have practiced the song so often that they could record it in less than thirty minutes. That was all the time left on the three-hour session. Their version was the same sound that club dancers and patrons enjoyed. It sounded so different from Berry's melody that Carlson could have released the record with Mack's name on it as writer. But Harry was honest to the core.

In Cincinnati, Steve focuses on venues that ranged from the still-known to the long-forgotten. They included the Reds' old Crosley Field, where the Beatles played twice, to the Club Ramon, which helped launch Danny Adler, who is described by Steve as "a teenage guitar prodigy who went on to front a popular roots-oriented British band call the Roogalators in the 1970s." In addition, the book tells the stories of the Black Dome, the Ludlow Garage (I once saw the Kinks there), the Surf Club, Flamingo Dance Club, and dozens more. The Flamingo story is interesting because the club booked popular local bands and some who were nationally known. They included African-American singers such as Bo Diddley, Jimmy Reed, Hank Ballard, Tommy Tucker, and Clyde McPhatter. Cincinnati's white soul bands were influenced by the blues and R&B singers and musicians. The Flamingo also brought in Bill Haley and the Comets, Mickey and Sylvia, Dee Dee Sharp and Gary U.S. Bonds, not to mention the wild man himself, Jerry Lee Lewis.

Steve has included many rare photographs and advertisements, and, fortunately, interviews with club owners, patrons, and musicians. Though the Flamingo was only one of many clubs, it is a fascinating example of how local and national acts merged on the stages and bandstands in Cincinnati and the world.

As Steve writes of the Flamingo: "Looking back, one act really stands out, even among this superlative bunch [of performers]. That wild singer Little Richard and his revue played three engagements at the Flamingo Dance Club--on May 21 and 22, 1965; July 9 and 10, 1965; and May 27 and 28, 1966. There is reason to believe that a young Jimi Hendrix, using the name Maurice James, was one of the guitarists in Richard's band for those first two engagements."

A special treat is a foreword by Jim Tarbell, who himself became a Cincinnati legend by founding the Ludlow Garage and supporting area musicians for decades. Jim was Cincinnati's vice mayor and owner of downtown's historic Arnold's Bar and Grill. Jim puts Steve's important work into perspective.

I recommend Steven Rosen's Lost Cincinnati Concert Venues of the '50s and '60s. It does more than recount the history of local clubs. It tells the story of music everywhere. The writing is strong, bringing to life the clubs, songs, and performers whose work will live on as long as people care about music.

Lost Cincinnati Concert Venues of the '50s and '60s, From the Surf Club to Ludlow Garage, may be purchased from bookstores, Amazon.com, and the publisher, www.historypress.com. The price is $21.99. 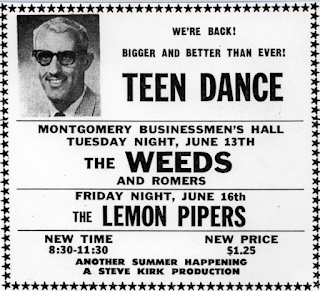 Some venues were temporary, like the Montgomery
Businessmen's Hall. Steve "Kirky" Kirk MC'd this
dance in the late 1960s. 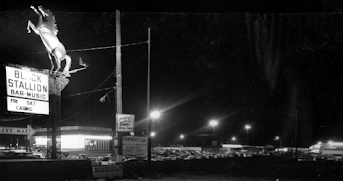 The Black Stallion was a popular nightclub on
Cincinnati's eastern edge in the late '60s and
1970s. It featured national and local bands,
including the Casinos and Billy Joe Royal.