The Language of Vinyl 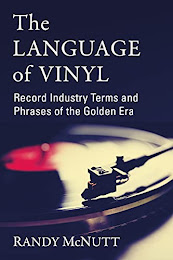 A new book is invading libraries. The Language of Vinyl is packed with terms and language used during the golden years of vinyl, the 1950s through the late 1980s. I began to gather these nuggets years ago when my friend and fellow label owner Shad O'Shea used the term "paper add." I asked him what it meant. He explained that the trade magazines would occasionally add a new record to their top 100 singles charts as a favor to friendly distributors, label owners, and recording artists. The motive, aside from helping a friend, was to test any interest in a newly released 45-rpm record. Most of the discs didn't catch on, but in some cases the records received enough exposure to interest radio program directors. The paper add wouldn't make it today. Too many charts and computers have seen to that.
I began typing the oddball terms into a Word document. The thing began growing organically until I had to start another document. I became a collector of vinyl anachronisms, which beats adding more vinyl to my crowded office. A few years later I had gathered so many of these forgotten words that I decided to keep going to see how many more I could collect. I began to solicit them. Then I began to expand the record-label lingo into words commonly used by disc jockeys, jukebox operators, veteran recording engineers, and distributors. Many words from the strange language came from the pioneers of the modern record business, guys like--if there are any characters like--Shad (Counterpart Records), Johnny Vincent (Ace Records), Harry Carlson (Fraternity Records), Rusty York (Jewel Records), and dozens more who were fiercely independent and colorful. Some equally weird terms came from the trade publications of the day, and from iron-willed jukers and musicians who came my way. Soon I had more than terms. I had phrases and references to long-gone incidents that affected the pioneers of the 45. By then I realized that I should add terms that are still used today, but their meanings have changed (cover record, for example). I also found some old photos and illustrations to go along with some of the terms. Finally, I told myself I just had to stop collecting because my search was becoming addictive. That's when I self-published the project as a book called Spinning the Groove. Five people bought it, including a friend who called it a "mercy buy." As with any addict, I couldn't stop collecting, so I added many more terms and lingo, dropped some narrative stories from the book, and revamped the thing as a dictionary. Thus, we have The Language of Vinyl, and the shameless bit of self-promotion you are now reading.
At $40, the book is beyond most vinyl fans' budgets. It is aimed at libraries and academic institutions. (The book does come in an e-book version.) If you're interested, check out the website for McFarland Publishing. The company is based in North Carolina.
My favorite term from the old record business? Butt splice! No, it is not a hemorrhoid surgical procedure. It means connecting two ends of an audio tape.
Posted by RANDY McNUTT at 12:29 PM