Foiled! The Conspiracy to Kill the 45 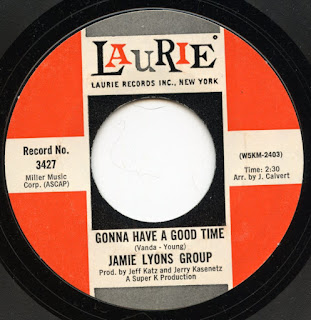 We live in a world of conspiracy theories, propaganda, and vinyl dreams.

Perhaps some sinister Q conspiracy threatens the venerable 45-rpm disc--the Big Hole of Rock 'n' Roll--but I'm not aware of it. Or maybe it's a Q&A. Excuse me, but as a 45-lover, I'm paranoid. The Streaming Illuminati has to pick on someone, and the 45 is still the smallest kid on the block. But that kid has spunk. He fights back. (In case you were born after 1995, the 45 is the smaller vinyl record with a big hole.)

For we older vinylites, the seven-inch single means 45 revolutions per minute and a big hole in the center of the disc. Oddly, the Big Hole is important. It is vacant, yes, but it is also a symbol of some sort to us. So anyone who suggests or has suggested killing 45 and the Hole is dangerous.

In years past, conspirators have threatened to kill the baby-boom music icon. The Big Guys ordered a "hit" on the little one as early as the mid-1950s. By 1958, Columbia Records was telling the trades that 45 revolutions per minute were not necessary. Though Columbia didn't admit it, a demise of the teen-revered 45 could have stifled the rock 'n' roll revolution. The single's offense? It ran at 45 rpms. Columbia seemed obsessed with 33-1/3 because its engineers created it and the long-playing album. The company introduced it in 1948.

The year after, RCA Victor dropped the "F" bomb, called the 45. It was seven inches of pure delight. It came in multiple colors. Also using microgrooves, the so-called "45" was more portable and collectible. It was perfect for parties. Teenagers bought the singles as well as smaller RCA 45-rpm record players that fit neatly in teens' rooms. (RCA sold both 45s and 45 record players.) While working on the 45 since 1939, RCA's engineers had kept the project a secret. Company executives referred to it as Madam X. She survived World War II, only to be unleashed at the start of the Cold War. This began what is known as the War of the Speeds--45 vs. 33-1/3 vs. 78. One of the speeds had to win. They could coexist for only so long. At least this is what many industry leaders and entertainment writers believed. Yet the 45 and the 33 survived. The 78 all but died.

A few years later, the 45 single was not the exclusive domain of teenage rock-'n'-roll. However, it was the main delivery system. Record labels knew that kids couldn't afford albums, so the companies pressed few of them. 45s were cheaper to make, mail, and store. Many rock artists were one-shot wonders anyway. By the late 1950s, kids began to think of the big-hole records as their own. Labels catered to the kids.

But opponents of 45-rpm lurked in the shadows. It was no surprise that the leading conspirators worked at Columbia, the nation’s largest label. Though Columbia had its share of obligatory R&B and rockabilly acts, in the mid- to late-1950s the label's heart wasn't into expanding into the latest fringe genres such as rock.

By 1960, however, the war drums beat loudly at Columbia when Goddard Lieberson, president, and Bill Gallagher, vice president of marketing, again began to challenge the practicality of the 45. (Columbia's Mitch Miller, a duke of adult music, had been disparaging rock-'n'-roll at every opportunity. He was a 33 man.)

As Columbia's major domo, Lieberson knew that his company had invested a fortune in what I call "the 33 game," and to his credit Columbia dominated the LP business. He maintained that changing the speed of the 45 to 33 (as he called it) would be the best way to deliver more sophisticated audio to music-lovers of all ages. Why not give Aunt Buelah, a 33-lovin' lady with piece of stereo furniture, the opportunity to scoop up Ronnie Self's Columbia single "Ain't I'm A Dog"?

The label had a lot to gain--especially in the "I-told-you-so" department--if the industry adopted the company's 33 single idea. To its credit, Columbia's microgroove technology had turned out to be far superior to the big grooves of the old 78-rpm discs. Through the '50s Columbia had introduced small-hole records such as the 12-inch LP and seven-inch extended-play album, both running at 33-1/3-rpm. Though the EP was never a big hit among consumers, it did appeal to some jukebox operators.

In the mid-'60s, the one-speed idea came up again. On February 10, 1965, Billboard went all in on the anti-45 plot by publishing an editorial titled "One-Speed: Gain for All." It accompanied a page-one news story by Lee Zhito called "1-Speed Revolution Supported by New York Leaders."

Lieberson told the magazine that by adopting the one-speed movement's plans, the record industry could offer one product instead of multiple ones, and thereby streamline the market. He said the new single that he envisioned would come with a small spindle or hole, like an LP, and run at 33-1/3 speed. In other words, the 45 single would change to a two-sided, seven-inch single that looked like and played like an extended-play disc. The Big Hole would disappear into the cloak of history and young people would miss the things that made singles unique.

Perhaps Lieberson was too engrossed in his ledgers to realize that his 33 might rob teens of The Big Hole. Such a move would be a coup of major proportions. But the man was convincing. He repeated his idea that consumers would save time, money, and bother by adapting the one-speed movement's plan. No more changing adapters and speeds. No more punch-out adapters. And adults might start buying singles, too. Though many adults enjoyed songs that showed up on the Top 40 radio charts in the early '60s, Gallagher said, they wouldn’t bother with buying the lowly 45 because it was associated with teenagers. To him, 45 meant mono. Mono meant kids. Kids meant less disposable income.

Gallagher became even more emphatic about changing the record world's landscape to one speed. He told the trades that it was impossible for Columbia to do the job on its own. The entire record industry had to comply.

He told Zhito, "The effort now being expended by Billboard and other leaders in the industry make this a marvelous time to consolidate our energies and broaden our base of the record business. Standardization on an industry-wide scale would act as a stimulant and broaden the singles market into the adult field." In other words, people over 30 would hijack the 45 and turn it into a mini-mini album. “As it stands now," Gallagher said, "the industry’s product line is too complex.”

It shouldn't have come as a surprise that Columbia wanted to eliminate the 45. After all, Columbia was slow to join the rock-'n'-roll revolution. Singer Billy Joe Royal once told me that the main reason Columbia signed him to a contract in the mid-1960s, aside from his talent, was to help the label catch up to other companies that had a head start in rock music. Billy rewarded Columbia's faith in him by hitting with the 45s "Down in the Boondocks" and "I Knew You When." Then came Paul Revere and the Raiders. Columbia was rolling. Ironically, this happened while Columbia's chieftains were still trying to encourage other labels to join them in changing over to the 33 system.

The whole movement was drenched in irony. Even RCA Victor, the company that created and launched the 45-rpm single, was complicit in the conspiracy. Label chief Norman Racusin told Billboard he believed in Columbia's idea. In a page-one story in the magazine, Zhito acknowledged that the one-speed movement "had been gaining momentum in the last several weeks." He noted that "industry leaders here [in New York] had joined a chorus of support for the one-speed movement."

By that time, however, the Beatles had arrived. Rock 'n' roll had grown up. The 45 had become entrenched in kids' minds and bedrooms. It could not be dislodged from its rightful place in the hearts of teenagers.

Clearly, Columbia needed a new strategy as it entered the era of "hippie music" and Janis Joplin. It came in 1968, when the firm issued the so-called Dual 45 that could be played on the more expensive stereo phonographs or the mono ones, which kids mostly used. The Dual 45 was intended to entice adults into buying singles, boost sales to jukebox outlets, and bolster the sagging singles market. Unfortunately for Columbia, the Dual 45 soon lost itself in the industry's stereo single. It was quickly embraced by Monument Records and soon by other companies. The stereo single failed to attract the expected adult buyers. By 1969, the 45-rpm single represented only 14 percent of record sales.

Somehow, the indefatigable 45 survived. It overcame the changes in speed, the great vinyl purge of the 1990s, and the tide of history. It never did die, not even when it had been buried. I can't imagine what kids would have done without a hole in their music.

Now, the 45 still lives. It might not be as popular as its counterpart, the LP, but it exists in its own little niche. Hurrah for The Big Hole! 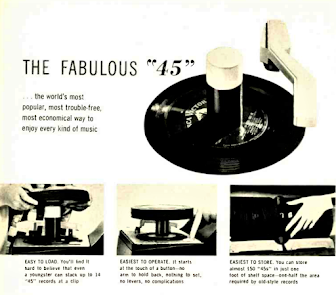 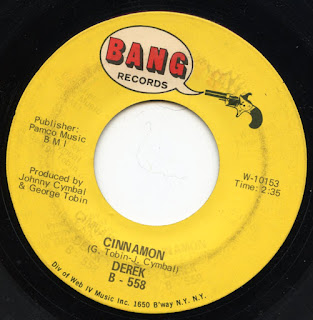 Posted by RANDY McNUTT at 4:17 PM No comments: