Jimmy Webb, Barry Mann, and Paul Williams: The Soundtrack of Your Life 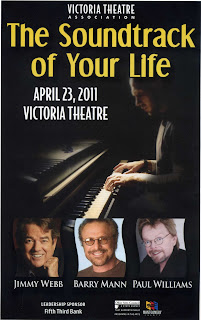 Perhaps this is why Barry Mann, Jimmy Webb, and Paul Williams came to Dayton to perform, and why they would like to take their show to other venues across the nation.
After all, music is all about creating a personal connection with people, and singing from the heart.
Posted by RANDY McNUTT at 11:50 AM No comments: