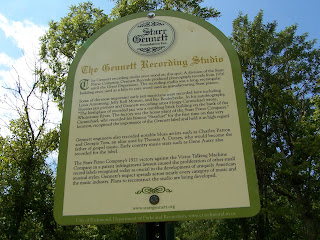 
Owner Rusty York at console of early Jewel
Recording, Mt. Healthy, Ohio, near
Cincinnati, circa 1961.﻿
Still Too Hot to Handle
More Historic Recording Studios of the 20th Century
This book is dedicated to my friend
and recording partner,
Bill Watkins

A Note from the Author
This is the first electronic installment of my book Still Too Hot to Handle: More Historic Recording Studios of the 20th Century, released in 2006 in limited quantities. It is now out of print. The book was a follow-up to Too Hot to Handle: An Illustrated Encyclopedia of Historic Recording Studios of the 20th Century. I'll publish more excerpts from Still to Hot over the next few months, but not back-to-back. The book's purpose is to save information on forgotten and/or neglected recording studios. Note that some of the entries on studios lack much information. If you have anything to add, send it to me and I'll expand the entries. I wanted to save whatever information I could find--even if only the name of the studio and its city.

We took the kids [Thomas Wayne and the DeLons] over to the old Royal Theater studio and recorded with two instruments—me on guitar and Bill Black on bass. We cut it in mono. The owners had recently installed a one-track Ampex tape recorder, which the engineer had to kick to start that day. The studio didn’t even have an echo chamber.
Scotty Moore on the recording of
“Tragedy” in Memphis, 1957.
We had only a monaural Concertone. It was trickery that pulled it off--pure recording trickery!
Frank Guida on the recording of
“Quarter Till Three” in Norfolk, 1963. 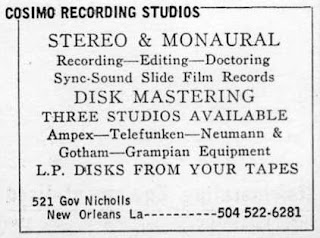 I owe a large debt to the people who have helped me with this book. They include Fred Masotti of Stoney Creek, Ontario, Canada, for tracking down old documents, lists of studios, and the titles of songs. Fred is a tireless researcher and a good friend.
Another friend, videographer Barry Conrad of Glendale, California, helped me when I conducted research in Los Angeles. He became my driver when the traffic looked impossible to overcome. Barry’s patience helped make this a better book. (Once, while driving down a busy boulevard, I yelled, “Hey, stop! It’s the old ABC Records studio!” Barry wheeled across a couple of lanes, found a place to park, and allowed me to take my time and shoot photographs of the closed recording icon.)

Another friend who helped with his expertise was Gene Lawson (creator of the Lawson Microphone) of Nashville, the late producer Shad O’Shea of Cincinnati, and studio owner-musician Rusty York of Mt. Healthy, Ohio.
More friends and other people helped. They are too numerous to mention, but their kindness and generosity do not go unnoticed. I appreciate all that they have done to help with this research. 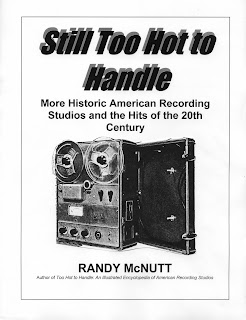 Front cover for Still Too Hot

ABLE TURNTABLE AND TAPE, 6912 Hollywood Boulevard, Los Angeles. What a name. Able Turntable, which sounds more like a phonograph repair shop than a recording studio, opened in 1968 with owners Ted Gardner an Mike Dutton running it. Gardner served as chief engineer--very ably, I assume. If you have more information about Able, you might want to share it.

AIR-TONE SOUND & RECORDING CO., 2330 Market Street, Philadelphia. One of Philly's older studios, Air-Tone was founded in 1944. By 1970 it was owned by Eugene Hessel and managed by Peter Kiefer. The studio engineer was Al Witherup. By then, Air-Tone competed with Impact Sound (1965), Nine Nineteen Studio (1967), and Nise Productions (1968). The era's more celebrated Philly studios, of course, included Sigma Sound (founded in 1968 by engineer Joseph D. Tarsia) and Virtue Recording (founded in 1959 by guitarist Frank Virtue.)

ARTISIAN SOUND RECORDERS, Hollywood. Parts of DeBarge's All This Love were cut in this Los Angeles area studio in 1983 by Motown.

ARTISTS' RECORDING CO., 320 Mill Street, Cincinnati. As a typical smaller-market studio, Artist attracted Cincinnati's lower-budget country crowd as well as a large gospel contingent. It operated in an old brick church in the city of Lockland, a former canal town just of Cincinnati, off Interstate 75. The studio opened in 1951, and over the years operated quietly in a region that developed studios such as King Records Custom Recording Service and Jewel Recording in suburban Mt. Healthy. By the early 1970s, however, Arists had started gaining momemtum in local country music. President Homer L. Milam also operated a busy record-pressing shop in the back of the studio. In the late '70s, Artists' hired engineer-fiddle player Rollin Bennett Jr. from Jewel. He recorded on the studio's new 16-track Ampex recorder. Bennett, an accomplished musician, attracted a number of national clients, including Judy Lynn. He produced a Billboard-charted single for her at the studio. Bennett quit to move to Louisville, and was killed in a highway accident in 1990. Artists' closed in the early 1990s.

AUDIOFAX STUDIO, 821 19th Avenue South, Nashville. A demo and master studio that oeprated in the early- to mid- 1960s.

BOLES STUDIO, Seattle, Washington. In 1960, Joe Boles owned a professional recording studio in a basement. The Ventures went there to record the original version of "Walk--Don't Run" on am Ampex two-track recorder. Boles engineerd the session.

BOULEVARD RECORDING STUDIOS, Chicago. Used by Cobra Records artists and other firms, Boulevard was one of the Windy City's busier studios for independent rock labels in the 1960s and early 1970s.

BOUTWELL RECORDING STUDIOS, 1929 Chaba Road, Birmingham, Ala. Opened in 1961, Boutwell and studio manager-engineer Ed Boutwell offered the latest in recording equipment to the Deep South. Later, he was competing with the New London Recording Center, which opened in 1969, and United Recoding and Productions, which opened in 1968.

BRITTANIA RECORDING, Los Angeles. Hail Brittania! In 1981, Merle Haggard came here to cut his Big Sky Country album for Columbia. The studio was used for a number of rock sessions throughout the decade.


Note: More studios coming in the second installment of Still Too Hot to Handle. 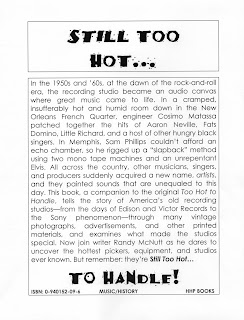 Back Cover for Still Too Hot 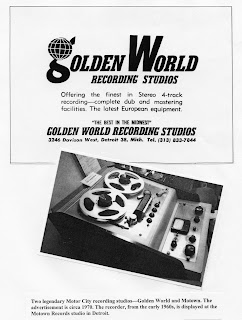 Golden World, Detroit. Mid-1960s.
Randy McNutt at the console, Studio B,
Hamilton, Ohio, 1974. He was mixing a recording
for Fraternity Records of Cincinnati. 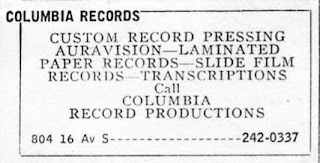