When Wilmington College invited me to speak about King Records as a part of the Smithsonian Institution's traveling exhibit "New Harmonies: Celebrating America's Roots Music," I had no idea that the day would turn out so interesting. That afternoon in Wilmington, Ohio, I met Ivan Tribe, who happened to be in the audience.
Ivan, an emeritus professor of history at the University of Rio Grande, is a highly regarded author who shares my interests in roots music and regional history. He has written many stories and books about bluegrass, country, and rockabilly performers over the years. After my King talk, I spoke with him about music that day.
We discussed King Records, The Midwestern Hayride, singers Bonnie Lou and Kenny Roberts, regional record labels, and other subjects that we could have went on talking about all day. The Hayride, a Cincinnati barn dance show which we both enjoyed when we were young, still captives us. As Ivan said, "The Hayride became in 1948 the first barn dance to make the transition to television, and some years later abandoned radio but continued on TV. For several seasons between 1951 and 1959 it was televised on the NBC network as a summer replacement program. Overall, the Cincinnati area's Boone County Jamboree/Midwestern Hayride played a major role in the growth and dissemination of country-western music." When the program finally went off the air in the early 1970s, it left a lot of music history behind.
Ivan has written a story about the show called "Midwestern Hayride Popularizes Country-Western Music." In fact, he has written two pieces for a free tabloid-size newspaper called New Harmonies: Celebrating America's Roots Music, published by the Ohio Humanities Council. You can pick one up free from the Council or at one of the traveling exhibit's sites throughout 2011 (I'll list them at the end of this story.) Ivan's other piece is "Traditional and Country Music in Appalachian Ohio." Other stories featured in New Harmonies include "Big Joe Duskin: Last of the Cincinnati Boogie Men" by my friend and former Cincinnati Enquirer colleague Larry Nager; "Cincinnati's King Records, Too Cool to Conquer" by Jon Hartley Fox, author of King of the Queen City, A History of King Records; "Spirituals Spread the Roots of Gospel," by Brenda Ellis, an associate professor of music at Wright State University in Dayton; "Being Here: Old-Time Fiddle Music in Community" by Judy Sacks, a scholar of Appalachian-style fiddling in Ohio; "Folk Scholarship Takes Root in 1960s and 1970s Music in Central Ohio" by Hank Arbaugh, a Columbus music publisher and recording artist; "Migration--Wherever the Heart Sings, It's Home" by Lucy Long, a former Smithsonian employee; and "Bluegrass Resonates in Columbus" by Tom Ewing, a bluegrass guitarist and former lead singer for Bill Monroe and His Blue Grass Boys. Tom's interesting story is a first-person account of being in bluegrass and performing with some legendary acts.
If you're interested in seeing the traveling exhibit or picking up a copy of the publication, contact the Ohio Humanities Council at 471 E. Broad Street, Suite 1620, Columbus, Ohio 43215-3857, or at www.ohiohumanities.org. The tour schedule for the remainder of this year is: May 22-June 22, Springfield Arts Council/The Heritage Center of Clark County, 117 S. Fountain Avenue, Springfield, Ohio;
Please make sure you call in advance, just in case there has been a change in schedule for the exhibit.
Posted by RANDY McNUTT at 11:55 AM No comments:

A Tour of King Records 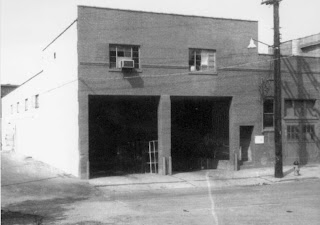 This is King Records, circa 1966. Behind the loading dock's
doors stood the King Recording Studio, where James Brown,
Hank Ballard and the Midnighters, and other performers
recorded. (Courtesy Lee Hazen.)
By Randy McNutt 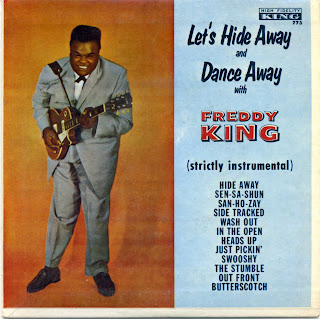 Posted by RANDY McNUTT at 7:22 PM No comments: