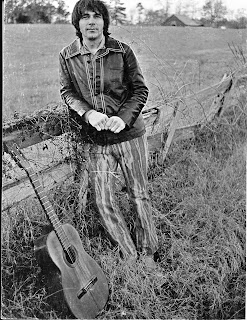 In the summer of 1965, Joe South emerged as a producer-writer with Billy Joe Royal's top ten single "Down In The Boondocks." Royal had been singing in Cincinnati, and I knew of him and wanted his new record. I noticed the songwriter's credit: Joe South. Over the next couple of years, Royal recorded more of South's soulful material: "I Knew You When," "I've Got To Be Somebody," "Heart's Desire," "Hush," and others. Soon, I bought Royal's album and I learned more about South, who also produced the recording and wrote many of its songs. What struck me about South was his originality. He didn't necessary try to write in a commercial vein. He did it naturally, with songs that reflected everyday life. In short, he was not a gimmick songwriter. He was simply a writer who captured people's emotions and feelings. His songs were so universal that they could be interpreted in any genre.

The public responded to his material. In 1968, the English rock band Deep Purple took "Hush" to the top of the pop charts, and, two years later, country singer Lynn Anderson did the same with South's "I Never Promised You A Rose Garden." Originally, Royal had recorded both songs. By then, everyone knew Joe South for his own hit record--"Games People Play," which hit big in late 1968 and early 1969.

Now I learn that Joe South died of a heart attack at his home in Buford, Georgia, on September 5, 2012, at his home near Atlanta. The news saddens me, for South was another seminal voice of the regional music system. "He was one of the greatest songwriters of all time," observed Butch Lowery, president of the Lowery Group, South's long-time music publisher. Speaking to the Associated Press, Lowery added: "His songs have touched so many lives. He's such a wonderful guy and loved by many."

Many people, including me, loved his music and respected his musicianship. He was a good singer, to be sure, but what I will remember most about South was his ability to play guitar and write songs that touched the heart. This is what writers and performers could do in America's regional music centers, those cities that developed their own individual recording industries. Atlanta was one of them. These cities had their own studios, labels, publishers, writers, producers, performers, musicians--everything necessary to launch regional and national hits. Like Memphis, New Orleans, Cincinnati, and other towns, Atlanta had its own musical infrastructure, including Bill Lowery's musical empire--a management company, song publishing firm, production company, and more. Lowery started the careers of good writers and singers such as Royal, Buddy Buie, Freddy Weller, Ray Stevens, Jerry Reed, Dennis Yost and the Classics IV, the Tams, and others. Joe South was another performer from the Lowery stable.

After writing "Boondocks" and another favorite of mine, "I Knew You When," South became popular in pop and country music. His songs transcended strict musical styles. He also played on sessions for Aretha Franklin, Bob Dylan, Wilson Pickett, Eddy Arnold, and Simon and Garfunkel. His "Games People Play," recorded in Atlanta, came from his album Introspect. I bought it, loved it, and admired its production. For it he won two Grammys, as Best Contemporary Song and the Song of the Year.

South recorded "Games" in a small, eight-track studio named Kin-Tel, over on Atlanta's Spring Street. He did so because the Lowery company's studio, Master Sound, was booked on the day he planned to record. Prior to South's arrrival, the studio was known mainly for making jingles. Owners Ron Kinder, a jingles producer since the 1950s, and partner Cecil Heftel, a radio station owner, didn't make many records in their studio. After "Games" hit, however, they started cutting musical acts independently.

South came back with more good singles, including "Walk A Mile In My Shoes," "Don't It Make You Wanta Go Home," and "Birds Of A Feather."

In an interview with me years ago, Royal recalled teaming with South in their early years of performing in Georgia. South recorded several singles then, in the early 1960s, but they failed to attract a national audience. Eventually, South became a studio musician and later the producer of Royal's "Boondocks." Royal said he didn't particularly like the song, but he recorded it because South wanted him too. The record overcame a flood of recordings by British Invasion groups, and started Royal's long recording career in pop and country music. 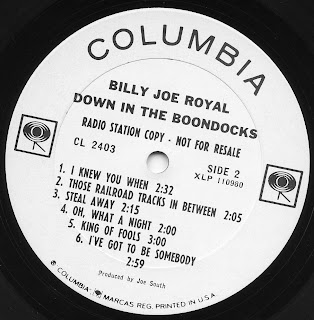 I remember Royal's Boondocks album with its back-cover photos of South and his musician brother, Tommy South. (Their real last name was Souter.) Tommy committed suicide in 1971, the Associated Press reported, and Joe moved to Maui for a time and retired from the music industry. Later, he resumed his career in the studio, with his last album being Classic Masters in 2002.

No doubt Joe South will be considered one of the greatest writer-singers ever to emerge from a regional music center. His music didn't come from New York, Los Angeles, or Nashville, although he worked in Nashville often and recorded there as a musician. His career will always be associated with Atlanta and Lowery's publishing company, and his music will be remembered for as long as people aspire to write good songs.

In  1958, Joe South began his hit recording career on Atlanta's independent NRC Records with a novelty named "The Purple People Eater Meets The Witch Doctor," a take-off on two No. 1 hits, Sheb Wooley's "The Purple People Eater" and David Seville's "The Witch Doctor." The record hit No. 47. South's last charted single was "Fool Me," on Capitol Records in 1971. It reached No. 78. By that time, the regional sound was still going, but South's career and life had taken a different turn. 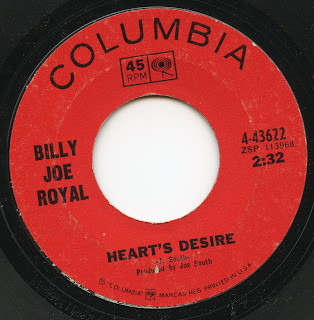 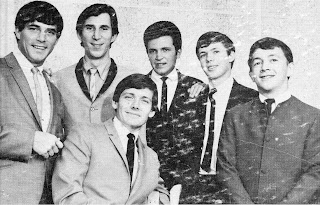 Posted by RANDY McNUTT at 10:31 AM No comments: